Why Tullian Tchividjian is Permanently Disqualified 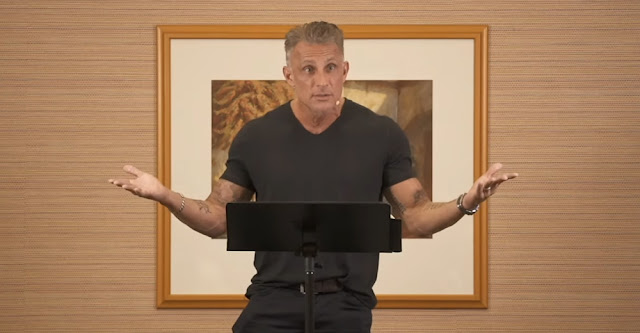 Tullian Tchividjian—who is the grandson of famed preacher Billy Graham; who followed the honorable D. James Kennedy as the pastor of Coral Ridge Presbyterian Church; who made a shipwreck of his ministry when he committed adultery with a member of his congregation; who was revealed to have had another affair; who threw his wife under the bus by making it look like she was the cause of their marriage problems; who was defrocked, then received another pastorate, and broke trust with that church; who has divorced, remarried, and returned to Florida to start his own church—is back.

Truth be told, Tullian was never gone. I can't remember a time in the last 4 years since his scandals were first exposed that I wasn't seeing his name. He never truly resigned from anything. He's always been preaching even if he wasn't pastoring. Now he has founded a church called The Sanctuary, "meeting each Sunday at the Hilton Garden Inn Palm Beach Gardens ahead of a planned formal launch next month," according to a weekend article in the Palm Beach Post.

The first 7 minutes of yesterday's sermon contains moments of irony (if not outright hypocrisy). For example, he refered to God's grace as a "scandal." He's not the only preacher I've heard use this word, and I've never been comfortable with it, but it's especially strange coming from Tullian. He also called himself a good person in the eyes of others, except, he joked, when he is "flying down Alternate A1A." Really? Breaking the speed limit is what might make us question his goodness? He also said that he has been mentoring and training young preachers. Yikes!

Within his sermon introduction, he referred to himself as the pastor of those who were in attendance. So this regular Sunday-morning gathering isn't some Bible study group meeting at a hotel and we're mistakenly calling it a church. It is a church plant. People are attending, and Tullian is their pastor. Shame on them, and shame on him. Tullian has disqualified himself from ever being a pastor again.

Now, do I believe the Lord when He says in Isaiah 43:25, "I, I am He who blots out your transgressions for my own sake, and I will not remember your sins"? Or when Psalm 103:12 says, "As far as the east is from the west, so far does He remove our transgressions from us"? Or when 1 John 1:9 says, "If we confess our sins, He is faithful and just to forgive us our sins and to cleanse us from all unrighteousness"? Yes, I believe all of this and more!

If I didn't believe God is faithful to cleanse us of our sins, I'd be in big trouble, for I also have sinned greatly before God, and I, too, am in need of a Savior. God is "merciful and gracious, slow to anger, and abounding in steadfast love and faithfulness" (Exodus 34:6). God has forgiven me of my sins. I know that He will forgive you of yours. It's what I'm devoted to preaching—"that Christ Jesus came into the world to save sinners, of whom I am the foremost" (1 Timothy 1:15).

Would God forgive Tullian Tchividjian for the sins he has committed? Absolutely! He can be restored to Christ's body and partake in the fellowship of communion at the Lord's table. But does that mean Tullian can resume the office of a pastor again? No, it does not.

The first qualification of a pastor is this: "An overseer must be above reproach" (1 Timothy 3:2, Titus 1:6-7). Every other qualification that follows explains what that means: a pastor must be faithful to his wife, he must be sober minded, self-controlled, managing his household well, and so on. In other words, the people who know him must be able to recognize his good character as an example of God's grace and Christian maturity.

"The idea is present blamelessness," John MacArthur teaches regarding the qualifications of pastors. "It doesn't mean he had to be perfect before he was a Christian; no one could do that. Everyone, before they came to Christ, lived in sin, and more sin, and only sin. So, the point here is, that present tense, this man must have a life without blame. That is the overarching requirement." He goes on to say, "The reason blamelessness is called for at the pastoral level is because we are the example which you are all to follow."

That said, Tullian Tchividjian is a bad example for anyone, let alone as a pastor. Even unbelievers know that cheating on your wife and blaming her for it makes you a really awful person. Tullian did this as a pastor! He knew better. Think about it: Can he ever be trusted with that office again? Yes, he can be forgiven his sins and know the grace of God, in the sense that he still has an entrance in the kingdom of heaven. But for the remainder of his life, he will never fulfill the requirement that a pastor must be "above reproach."

In a recent interview, Phil Johnson, director of Grace to You, pointed out that adultery disqualifies a man from ministry "permanently." Said Johnson, "That kind of sin leaves a reproach that cannot be blotted out. And the first requirement for a pastor is that he must be above reproach. So while he can be forgiven of that sin... what he cannot do again is stand up and lead that church."

I've consistently taught this same thing (example 1, example 2). There are sins that can permanently disqualify a man from ministry. With regards to adultery, we're talking about a moral sin punishable by death in the Old Testament (Deuteronomy 22:22) and given more serious warning and greater consequences in the New Testament (video 1, video 2). Praise God for His grace that an adulterous man can stand before God righteous. But with regards to standing in the pulpit, not every man is qualified, even if he is a gifted teacher. James 3:1 says teachers will be judged with greater strictness.

Though Tullian is unqualified multiple times over, he has positioned himself as a pastor again, this time free from having to answer to anyone else (The Sanctuary is unaffiliated and non-denominational). The people under his teaching should also be ashamed. When it comes down to it, they want their ears scratched (2 Timothy 4:3), and Tullian's life and teaching with antinomian undertones—that you're not held accountable to a moral law—is exactly what people will come to his church looking for. According to the article I referenced earlier, the church already has a list of 500 supporters.

If Tullian truly revered the word of God as he says he does, he needs to humble himself in the fear of the Lord and step away from the work of ministry entirely. He must attend church as a congregant, not clergy. He would still be among those who can say, "I once was that, but I've been washed" (1 Corinthians 6:11). He can still say, "Then I will teach transgressors your ways, and sinners will return to you" (Psalm 51:13). But he must do this without holding a church office, for he has disqualified himself.

The rest of the church is responsible to hold their elders accountable. As we read in 1 Timothy 5:19-21, "Do not admit a charge against an elder except on the evidence of two or three witnesses. As for those who persist in sin, rebuke them in the presence of all, so that the rest may stand in fear. In the presence of God and of Christ Jesus and of the elect angels, I charge you to keep these rules without prejudging, doing nothing from partiality." It's very unfortunate that Tullian's church is not in keeping with these commands. Tullian causes his congregation to stumble, and they cause him to stumble.

I do not take lightly ever having to say that another man is unqualified for ministry. I understand full well that the call of a pastor is to be above reproach. As John Knox was famous for saying, "I have never once feared the devil, but I tremble every time I enter the pulpit." May the Lord God keep me faithful as an example to the flock, to "serve the Lord with fear and rejoice with trembling" (Psalm 2:11).