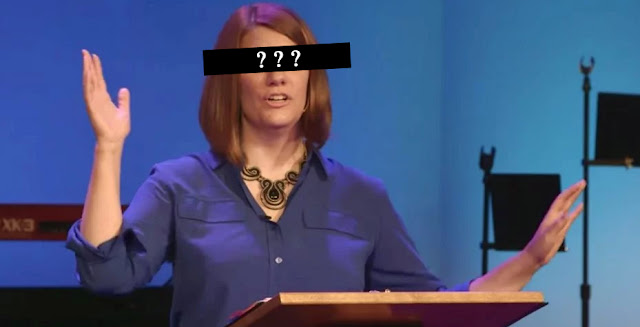 In 2 Timothy 4:1-4, the apostle Paul told his protégé, "I charge you in the presence of God and of Christ Jesus, who is to judge the living and the dead, and by His appearing and His kingdom: preach the word; be ready in season and out of season; reprove, rebuke, and exhort, with complete patience and teaching."

It's been almost two months since the passing of Rachel Held Evans, bestselling author and liberal theology blogger. In memoriam, she has been lauded as a feminist and an advocate for LGBTQ causes. She was very confrontational with the church, insisting it get on "the right side of history" with these issues.

Some of you are aware that I was the last person she went on a Twitter-rant about before she died (specifically regarding a WWUTT video I did). I'd jotted down some notes and planned to make a video response to her claims, hoping that maybe it would open up a dialogue with her. But then she went into the hospital on April 14, three days after her comments toward me. She was down with the flu and an infection. Of course, that wasn't the best time to initiate any kind of debate.

A few days later, word came that she had been put into a medically-induced coma, from which she never woke up. She died on Saturday morning, May 4. She was 37 years old, just a few months younger than I am, and left behind a husband and two children.

Though I will never have another opportunity to address Rachel, what she taught continues to damage the souls of countless thousands of people, and will do so for many more years. What I had prepared to say to her, I say now for the sake of those misled by her teaching.

Hanging Her Life On It

Shortly before her illness I posted a video entitled What if God is a Woman? (watch by clicking the title). The purpose of the video was to respond to common arguments liberal theologians use to justify calling God "mother" or referring to Him using feminine pronouns. One of those theologians referenced in the video was Rachel Held Evans.

I shared the video on WWUTT's Twitter account with this headlining comment: "Rachel Held Evans has said she would go to the gallows over her feminist theology that God is 'mother.' Jory Micah [another false teacher] has referred to God by feminine pronouns. But they fashion a god of their own making. A 90-second video!"

In response to this, Rachel said, "Where did I say I would 'go to the gallows'? This is a terribly researched and poorly presented argument." So Rachel was shown where, in her own words, she had made such a statement. In a blog she wrote on May 16, 2014, she said the following:


"And as a woman, referring to God as She or as Mother serves as an important, liberating reminder that I am indeed created in the image of God, not as some lesser being who exists in perpetual subordination to men, but as an expression of God's very self.

"If that makes me a heretic, you can string up the rope."

Rachel replied, "Um, seems like maybe you are the ones who misunderstand metaphor. I don't actually want to be killed for believing God's not a dude. (And how about not bearing false witness by epically misrepresenting what I actually believe?) This is a poorly produced, badly researched, and pathetically argued hit piece that misrepresents my views and leaves no room for nuance. How desperate do you have to be to protect an exclusively masculine God to make this? You can make an idol out of that, too. Deuteronomy 4:16."

That's a lot to unpack, all of it a blanket condemnation without responding to a single argument that was made about her theology. She blew me off with personal smears, which of course received hundreds of likes by her followers (and are still receiving likes—I get daily notices). Considering her comments, I doubt she watched the video at all. It only would have taken her 90-seconds!

First of all, Rachel said, "Seems like maybe you are the ones who misunderstand metaphor" and I left "no room for nuance." Is there a rule somewhere that you can't borrow from someone's metaphor in order to, say, make a point with some wit? She said "string up the rope" to convey her no-regrets attitude over calling God her "mother." I simply continued the theme emphasizing her head-strong nature by saying she would "go to the gallows." Hypocritically, Rachel did what she accused me of doing—she left no room for nuance, and she misunderstood her own metaphor!

Third, she said, "This is a poorly produced, badly researched, and pathetically argued hit piece." Again, this was a deflection away from the arguments being made. When someone, generally of the liberal theological persuasion, cannot confidently or directly defend what they believe with Scripture, they tend to attack the personal character of the one challenging their beliefs. (By the way, this is exactly what Beth Moore has been doing lately.)

I believe my work speaks for itself, and you can determine if you think it's "poorly produced." As for "badly researched," my sources are cited. A commenter named Holli said, "Never heard or read these words from her. Where is your reference? Documentation?" There were references in the video, and the transcript has links. This was also not a "hit piece," since the engine that drives a hit piece is using false information to sway public opinion. In fact, it was Rachel who spread false information to sway public opinion about me.

In another comment regarding my video, Rachel said, "I've written four books, hundreds of blog posts, and dozens of articles, and only once have I used a feminine pronoun for God." Friends, that was a bald-faced lie. In the video, I clearly cited two occasions where she did this in two different blogs more than two years apart—one on April 6 of 2012, and the other on May 16 of 2014.

Furthermore, I found at least a half-dozen online comments where she spoke of God with some kind of feminine verbiage (that was just through a general search that took me a few seconds). She made a reference to a quote from liberal writer Alexis James Waggoner who said, "God is a mother." She is listed as a co-collaborator with the band Gungor and the Liturgists podcast on their album God Our Mother. These were not merely careless, occasional references Rachel made—they were thought-out, deliberate expressions of her theology.

In her own words (in the block-quote above), Rachel was unhappy with how God revealed Himself in Scripture. What the Bible said about her, being made in God's image, was inadequate. It made her feel "in perpetual subordination to men." She had to have God on her terms. She called Him "mother," and she called it "liberating." To know the Father sent His only Son to deliver His people from sin and death was not enough for her.

In another comment about my video, Rachel said, "[I'm] not looking for sympathy. I just think this says a lot about how these guys think of women. Like, how freaked out are they going to be when (if all of this is true) they enter the full presence of God at resurrection and are suddenly hit with the reality that God's not a dude?"

That's an incredibly telling comment. First, if anyone warned her that it was blasphemy to call God "mother," she would paint them as a misogynist. Second, Evans did not wholeheartedly believe Christianity was true. And third, I said in the video, quoting from Scripture, God is Spirit and not man (another reason I don't believe she watched it). Regardless, God has revealed Himself in the masculine, and that is how we are to worship Him—according to His word, not our words.

At the end of my video, I said that a person who does not repent will be judged with the nations that worshiped the Asherah, or the mother-god. In Micah 5:14-15, God said, "I will root out your Asherah images from among you and destroy your cities. And in anger and wrath, I will execute vengeance on the nations that did not obey."

Mere days after she dug in her heels and defended her mother-god theology, lashing out at anyone who would question it, Rachel Held Evans died. She entered the presence of God and has been hit with reality. Galatians 6:7 says, "Do not be deceived: God is not mocked, for whatever one sows, that will he also reap."

Following Rachel's passing, Beth Moore said, "Thinking what it was about Rachel Held Evans that could cause many on other sides of issues to take their hats off to her in her death. People are run rife with grief for her babies, yes. But also I think part of it is that, in an era of gross hypocrisy, she was alarmingly honest."

No, she wasn't. Rachel was not "alarmingly honest." Candid, yes. But being blunt is not the same as being honest. Rachel Held Evans was a liar. She vomited deception and hurled vitriol at those with whom she most disagreed. Her teaching was soul-searing acid. The venom of asps was on her lips. Thousands and thousands of people will go to hell believing the things Rachel said.

She taught as good what God has said He will judge with fire. She encouraged men to burn with passion for each other, and women to exchange natural relations for unnatural ones. She believed boys could change into girls if they wanted, but a boy who claimed to be gay could not change. She chastised the bride of Christ, His church, whenever it refused to exchange biblical fidelity for LGBTQ propaganda. She told women to become pastors, and said, "The best preachers I know are women." In an era of gross hypocrisy, she was a rank hypocrite, who claimed to be of Christ, but she hated His word.

Jesus said, "If anyone loves me, he will keep my word, and my Father will love him, and we will come to him and make our home with him. Whoever does not love me does not keep my words. And the word that you hear is not mine, but the Father's who sent me" (John 14:23-24). The Spirit says, "Whoever says 'I know Him' but does not keep His commandments is a liar, and the truth is not in Him" (1 John 2:4).

As I said in a previous blog, I prayed for Rachel that God would have mercy on her soul. I have also been a false teacher, but God has shown mercy to me. Rachel had heard the true gospel, and I hope her heart was turned before its last beat. But whatever may have happened in her final moments, it does not redeem her damnable teaching. Let the reader be warned. Fear God and repent. Repudiate the words of Rachel Held Evans and revere the word of Christ.

Back to 2 Timothy 4:3-5, the apostle went on to tell his protégé, "For the time is coming when people will not endure sound teaching, but having itching ears they will accumulate for themselves teachers to suit their own passions, and will turn away from listening to the truth and wander off into myths. As for you, always be sober-minded, endure suffering, do the work of an evangelist, fulfill your ministry."