Is Aaron Hernandez Guilty or Innocent? 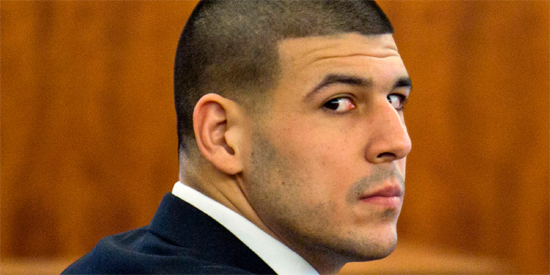 Aaron Hernandez, the famed football tight-end for the New England Patriots, was convicted of the murder of Odin Lloyd who died of a gunshot wound on June 17, 2013, in North Attleborough, MA. Hernandez was arrested 9 days later in connection with his death, and was found guilty of first-degree murder which came with a mandatory life-sentence without the possibility of parole.

Hernandez was also indicted for the 2012 double homicide of Daniel de Abreu and Safiro Furtado, but was acquitted earlier this year. Just days after his acquittal, Hernandez was found dead in his prison cell having hanged himself. His death was ruled a suicide. Cardboard was jammed under the cell door to make it difficult for someone to enter and stop him, and Hernandez had covered the floor in shampoo so his feet would slip and he'd be unable to save himself if he had second thoughts.

He left three handwritten letters next to an open Bible and had written the reference to "John 3:16" in ink on his forehead. He also had rosary beads hanging on the wall of his cell. In addition were drawings on the walls in his own blood. One drawing was an unfinished pyramid with the Eye of Providence and the word "Illuminati" scrawled underneath. In the notes he had written, he said he was entering a "timeless realm," that he loved his family, and no one should shed any tears for him.

Today, less than three weeks after his suicide, a Massachusetts judge acquitted Hernandez of murder, and based her decision on a legal rule called abatement ab initio. According to the rule, if a defendant dies before their appeal is heard, the conviction gets thrown out. Hernandez did not have the chance to appear before he took his own life. So though Aaron Hernandez died a convicted murderer, in the eyes of the law, thanks to this legal loophole, he is an innocent man.

There is a day that is fixed on which God will judge the world in righteousness (Acts 17:31). Everyone will stand before the judgment seat of Christ, and He will gather the nations before Him and separate them as one separates the sheep from the goats. Those who worshiped Jesus Christ as Lord and Savior and did the things that Jesus did will enter into eternal life. But those who did not know Christ will suffer under the eternal wrath of God (Matthew 25:31-46).

There will be no legal loopholes. It is appointed for a man to die once, and after that comes judgment (Hebrews 9:27). None of the laws that man can devise will be able to save a person on that day. Such laws and legal stipulations have no bearing on the condition of a person's eternal soul. Jesus said not to fear the one who can destroy the body and after that can do nothing. Instead, we are to fear Him who, after He has killed, has authority to cast into hell (Luke 12:4-5).

A man or woman can die innocent in this life, having not broken any law of man. But on the other side, he or she will be found guilty of breaking the Law of God. As for the lawless and disobedient, the ungodly and sinners, for the unholy and profane, for those who strike their fathers and mothers, the sexually immoral, men who practice homosexuality, enslavers, perjurers, and whatever else is contrary to the Law of God (1 Timothy 1:9-11).

As for adulterers, thieves, the greedy, drunkards, revilers, and swindlers (1 Corinthians 6:9-10). As for the heart that brings forth evil thoughts, murder, adultery, theft, false witness, and slander (Matthew 15:19). As for the cowardly, the faithless, the detestable, as for murderers, sorcerers, idolaters, and all liars, their portion will be in the lake that burns with fire and sulfur, which is the second death (Revelation 21:8).

All have sinned, and the wages of sin is death (Romans 3:23, 6:23). The only way that a man can escape this sentence under the holy and righteous justice of the living God is if his sins have been atoned for by the perfect blood of Jesus Christ. This is not a "loophole." Justice has been paid, and it has been paid by Christ. This is the grace and mercy of a loving God who, though we deserve His wrath and nothing else, gave Himself for us to redeem us from all lawlessness and to purify for Himself a people for His own possession who are zealous for good works (Titus 2:14).

The wrath of God was poured out upon Christ on the cross. He took our sentence upon Himself, and by His wounds we are healed of our iniquities (Isaiah 53:5). He cancelled the record of debt that stood against us with its legal demands. This He set aside, nailing it to the cross (Colossians 2:14). Jesus kept the Law when we could not and lived a perfect life, and for our sake He became sin who knew no sin so that in Him we might become the righteousness of God (2 Corinthians 5:21).

For those who have turned from sin and worship Christ the Lord, your sins are forgiven for His name's sake (1 John 2:12). Let your conduct in this world be honorable, so that when others speak up against you as evildoers, they may see your good deeds and glorify God on the day that He returns to judge the living and the dead (1 Peter 2:12). This is the only way for you to be saved -- through faith in Jesus Christ -- and no other way. There is no other way one can stand righteous before God than clothed in the righteousness of Christ. He will forgive you your sins, cleansed from all unrighteousness (1 John 1:9), and save you from the day of wrath, making it for you a day of rejoicing.

Even more than this, we will be raised with new and imperishable bodies, like the body of Christ our Lord (Philippians 3:21), and will become fellow heirs with Him in His kingdom. He will wipe away every tear and death shall be no more, neither will there be mourning, crying, or pain ever again (Revelation 21:4). Turn from sin and cry out to God for forgiveness, and you will have it. Go to church so that you may grow in the knowledge of Him, in brotherly love and kindness, stirring one another to love and good works, encouraging each other as we see the Day of the Lord drawing near (Hebrews 10:25).

No one knows the day or the hour that they will die. And there are any number of ways that you could be taken out of this world at a moment. A feather can hold itself to the ground against a strong gust of wind more effectively than you can hold your life in your own hands. As the great preacher Jonathan Edwards has said:


"It is no security to wicked men for one moment, that there are no visible means of death at hand. It is no security to a natural man, that he is now in health, and that he does not see which way he should now immediately go out of the world by any accident, and that there are no visible danger in any respect to his circumstances... All the means that there are of sinners going out of the world, are so in God's hands, and so universally and absolutely subject to His power and determination, that it does not depend at all the less on the mere will of God, whether sinners shall at any moment go to hell, than if means were never made use of, or at all concerned in the case."

It is by the grace and will of God that you have not been snuffed out in this very moment, though that is what you deserve. And God has no obligation to spare you His wrath. Who has done anything for God that He owes something to them (Romans 11:35)? He sits in the heavens and He does as He pleases (Psalm 115:3).

But it has pleased God through the sacrifice of Jesus Christ to atone for the sins of His people. He rose again from the grave, showing that He has power over death itself, so that all who believe in Him will inherit His eternal life. He has done this by His great mercy and love, to the praise of His glorious grace (Ephesians 1:6). We know God is true to His promises to save the people of Jesus Christ because He is true to Himself (2 Timothy 2:13).

The verse that Aaron Hernandez scrawled on his forehead, John 3:16, says this: For God so loved the world that He gave His only Son, that whoever believes in Him will not perish but have everlasting life. Aaron Hernandez did not understand this verse or any of the word of God, nor did he have the life of Jesus Christ. Otherwise, he would not have taken his own life, for no one who murders has the eternal life of Christ abiding in him (1 John 3:15).

There is no sin Aaron Hernandez committed that he would not have been forgiven. But instead of trusting in Christ, he tried many other ways to get to heaven by his own power -- not through the God of the Bible, but through the false god of the Illuminati and the false god of the Roman Catholic Church. Jesus said, "I am the way, the truth, and the life. No one gets to the Father but by me" (John 14:6). Jesus is not one of the ways. He is the only way to God. And whoever does not know the truth does not know the way.

Though a judge on earth may pardon the sins of Aaron Hernandez, the judge of all the universe does not submit to the will of men. He is great and He is fearful, which is why it is said, "The fear of the Lord is the beginning of all knowledge, but fools despise wisdom and instruction" (Proverbs 1:7). Whoever does not fear God knows nothing (1 Corinthians 8:2). All of His works are wonderful. The stupid man cannot know and the fool cannot understand the mighty workings of God; that though the wicked sprout like grass and all evildoers flourish, they are doomed to destruction forever (Psalm 92:6-7).

Today is the day of salvation (2 Corinthians 6:2). This is the day to turn from your sin. Call upon the Lord and ask for His forgiveness. Cleanse your hands, you sinners, and purify your hearts, you double-minded. Be wretched and mourn and weep. Let your laughter be turned to mourning and your joy to gloom. Humble yourself before the Lord, and He will exalt you (James 4:8-10). Believe on the name of the Lord Jesus Christ, and you shall be saved (Acts 16:31).