Is Donald Trump a Baby Christian?

Perhaps you've heard the rumor that Donald Trump is a Christian now. It happened just recently, according to Dr. Dobson. "I don't know when it was, but it has not been long," Dr. Dobson said. "I believe he really made a commitment, but he's a baby Christian."

Dr. James Dobson, founder of Focus On the Family and someone I grew up listening to, is among a list of evangelicals that make up Trump's evangelical advisory board, or more specifically what's called his "Faith and Cultural Advisory Committee."

It's a pretty eclectic mix that includes Southern Baptists like Jerry Falwell Jr, David Jeremiah, and Ronnie Floyd; word of faith preachers like Ken and Gloria Copeland and Paula White; politicians like Michele Bachman and Ralph Reed; and megachurch pastors such as James Robison, James MacDonald, and Robert Morris (more popular for Kari Jobe than for being Robert Morris).

According to Christianity Today, not everyone on the board endorses Trump, which is news to me. I find it silly that anyone would be on that panel who hasn't made up their mind about Trump. Truly they have to know that he's using their name and influence to make himself look pretty (see Proverbs 23:1-8 about dining at the table of a ruler). Of course, that can go both ways. Someone can also use Trump's name to make themselves look important.

One thing is for sure: Liberty University president Jerry Falwell Jr. is all in for Donald Trump... with a very embarrassing endorsement... 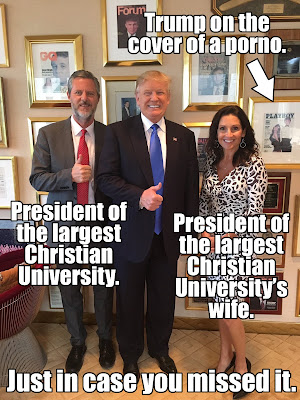 As a quick evangelical American history lesson, what makes that endorsement even more embarrassing is that Falwell's father, Jerry Falwell Sr., waged a major crusade against pornography back in the 80s. He sued Penthouse and Hustler, and he had public debates with Hustler founder Larry Flynt. He protested against Playboy and banned the magazine from the Liberty campus.

How about the rest on this advisory panel? Are we to take the word of anyone on the committee, like Dr. Dobson's, and believe that Donald Trump is in fact a brother in Christ? Here are five rhetorical questions; reasons as to why you should remain skeptical (I talked about some of this on the podcast today):

2) Whose God does Donald Trump believe in?
With a pretty eclectic evangelical board, whose version of God has Donald Trump heard about? Ken Copeland's? Paula White's? They believe in a false god. Paula has even said that Jesus Christ is not the only begotten Son of God. If Trump has heard the Copeland's tell him about Jesus, their version of Jesus will make him rich and give him everything he wants -- which is right up Trump's casino-laden alley. [Edit: Well, it turns out it was probably Paula White who witnessed to Trump.]

3) What does Donald Trump have to gain?
Some of these teachers surely have good intentions. They desire Trump would be saved, or may be endorsing Trump because they have the best interest of the people in mind. Trump has a history of using people for his benefit. Isn't it fair to say Trump will take advantage of the kindness of some of these teachers to make himself look good, especially in trying to convince those skeptics who have questioned the legitimacy of his claims to faith?

[Edit: This has been re-phrased from the previous wording which was directed at the motives of the evangelical board rather than Trump. I've wrestled with this point since posting it because I'm asking the reader to doubt his motives as genuine is uncharitable. It is the Lord who weighs the heart. Of these five questions, this would be the one to least consider.]

5) Has Donald Trump said anything?
Again, these are rhetorical questions, and the answer to this is no, he hasn't. If it's true that he's repented of his sins and is now a follower of Jesus Christ, he needs to say that. It needs to come from him, not some third-party. Our confession of faith cannot be done with someone else's mouth but with our own (Romans 10:9). When Donald Trump does confess his faith, I hope it would sound something like this:


I've done a lot of terrible things in my life: I've lied, I've cheated, I've manipulated people, I've been unfaithful to more than one wife. I'm an adulterer, I have promoted adultery, and I've made money from adultery. I've taken advantage of women, I've said horrible things about them and about other people. Some of my business decisions were completely self-serving and destroyed the lives of others, including entire families.

And this is just the short list. You could write books about all of the terrible things I've done, and maybe someday someone will. Some people have already, I suppose. What I'm trying to say is this: I have sinned. I have sinned against God and I have sinned against you. Whatever you think I deserve for that sin, the fact is I deserve worse. I deserve to go to hell. But praise God, he saved me. He sent his Son, Jesus, to die on the cross for my sins. It's by the death of Jesus Christ that I know I have been saved, and it is by the resurrection of Jesus that I know I have eternal life. It is the life of Jesus Christ that I now want to follow after. I know, according to the godly teachers I'm surrounding myself with right now, it is by his grace that he will make that possible.

The list of people I need to apologize to is so long, I probably wouldn't be able to get to the end of that list in the years I have left. I have been self-absorbed, advancing and promoting myself even during this presidential campaign. What I want to ask of you is this: that you would forgive me. I'm not asking for your vote. Not right now. I'm just asking that you would forgive me and show me grace, because God has forgiven me.

The Bible says with many counselors there is wisdom. It is the Bible that is my source of wisdom. It's my favorite book, and now I can actually say that and mean it. I will no longer use the name of God to get what I want. I will praise his name because he is worthy to be praised.

I know that I cannot do this on my own. I don't have as big or as smart a brain as I've said I have -- some of my critics are nodding in agreement. I have some God-fearing men helping me with the things I still need help with. I have a long way to go, but by the grace of God, I will get there. I am learning to die to myself and live for Christ. If you need to find me this weekend, I'll be at church, and I would encourage everyone else to do the same.

Something to that effect. It would be even more powerful and more genuine if he didn't read such a statement but it came directly from the heart -- a heart that has been changed by Christ and is indwelt by the Holy Spirit.

This kind of confession is what I've prayed Obama would do. His disciples are ridiculously loyal. If he were to make such a statement as this -- saying that he's repented of his sins and has become a follower of Christ, realizing that he's been responsible for the murder of millions of children but has begged God for mercy -- I truly believe a revival would break out in this country. The legacy he would leave behind would be far greater than the one he's currently leaving behind.

As I pointed out in the sermon on Sunday, Obama's legacy right now is that he was able to put a man in the woman's restroom. That's it. That's as great a legacy as he can leave on his current trajectory. His disapproval rating is lower than his approval rating on every single major issue except one -- gay rights. He can change that if he repents of his sins and points this nation to Jesus Christ. But that's if it's God's will and not his that is done.

All of us once lived in the passions of the flesh, following the prince of the power of the air, the spirit that is now at work in the sons of disobedience. It is by God's mercy and his providence that he saved us -- not by any work that we have done, but because of the work that Christ has done. There is no room for anyone to boast in their own righteousness. We have the righteousness of Jesus Christ our Lord (see Ephesians 2:1-10).

Donald Trump is not a baby Christian. He is a lost man. From his own mouth he has said he doesn't need to ask forgiveness for anything and that he can take care of it on his own. That is a man who is bound for hell unless he repents and is set free from the bonds of death by Jesus Christ.

We as the church have every right to discern whether or not Donald Trump is walking in forgiveness (John 20:23). He is not. He needs prayer. Not pandering.