The following is a letter I sent to Bob Cesca in August, 2015, responding to an article he wrote for Salon.com. I never got a reply from Mr. Cesca. There are some points in this letter that I believe are relevant to current headlines involving Planned Parenthood. The following is for your edification. Some edits have been made for grammar and spelling.

My name is Gabe Hughes, a pastor in Kansas. I read your Salon article, Wing-Nut Conspiracy Theorists Have Done It Again: The Truth About Planned Parenthood Hoax Revealed. You had a few "facts" that weren't accurate. I wanted to shed a little light on them for you. You used the word "objective" to describe your facts, so considering that you believe in objective truth, I hope you will receive this objectively. I offer this to bring peace.

"Planned Parenthood is not selling fetus parts for profit or otherwise."

Actually, they are. These are quotes from Planned Parenthood staff, and none of these comments are doctored or taken out-of-context. They imply what they imply:

In 2013, Planned Parenthood performed 327,653 abortions at their clinics. They did 1,880 adoption referrals, and prenatal services for 18,684 clients [Edit: which we now know is a lie]. So abortion is 94 percent of the pregnancy services offered by Planned Parenthood. (Rev. Kevin DeYoung debunked the 3% myth a few years ago. You can find his article here.)

Even by the most liberal estimates (no pun intended), it'd be hard to present a case that abortion is any less than 12 percent of Planned Parenthood's total services. PP saw 2.7 million total customers at its health centers in 2013, and performed 327,653 abortions. So 12 percent of their total clientele got an abortion.

Reasonably the 94 percent number is more accurate, though it's probably more fair to state that number this way: Of every pregnant woman that walked into a Planned Parenthood center in 2013, we know that 94 percent of them walked out no longer pregnant.

"Per the Hyde Amendment, no federal funds can be used for abortions. And there's no evidence Planned Parenthood has done so."

That's not true. And you say it yourself in your next bullet point...

"Consequently, de-funding Planned Parenthood would put into jeopardy its ability to save lives and, germane to this issue, prevent abortions. The Washington Post editorial board concluded: 'No federal money is used by Planned Parenthood to provide abortions except in some rare exceptions.'"

So The Washington Post actually concluded that federal funding has been used to pay for abortions. That, Mr. Cesca, is illegal. [Edit: It could be argued that the Hyde Amendment allowed for federal funds to be used in the case of incest, rape, or to save the life of the mother, but the Post doesn't specify that. The evidence clearly shows Planned Parenthood is using taxdollars to pay for abortions. No doubt about it.]

"Along those lines, in 2013 and 2014, 3,577,348 patients were provided with birth control services by Planned Parenthood. That's upwards of 3.5 million potential abortions prevented. What happens when these services disappear? Maybe the press should quiz anti-choice Republicans about this one."

What if I were to make this claim: "If Planned Parenthood were to lose federal funding, the 3.5 million people who previously received birth control from Planned Parenthood would stop having sex out of fear of having an unwanted pregnancy." Does that seem like a reasonable claim to you? No, it doesn't seem like a reasonable claim to me either. But it's just as reasonable a deduction as the one you made.

"Additionally, Planned Parenthood would lose the ability to conduct breast, cervical and colorectal cancer screenings — hundreds of thousands per year. It’d also lose the ability to perform thousands of vasectomies every year. How many unwanted pregnancies will result from the loss of this particular option?"

Again, you're concluding that women have no other way of receiving these services. You're also concluding that without government funding, Planned Parenthood will no longer be able to provide them [Edit: They don't actually provide them]. Why is it so unreasonable to demand that Planned Parenthood be able to stand on its own like every other non-profit that survives without government funding?

You're attempting to justify that it's okay for Planned Parenthood to receive federal tax dollars while dismembering and distributing the organs of dissected fetuses -- for profit or not is beside the point -- so long as they provide these other services. Who cares what those videos show or what's going on in a Planned Parenthood freezer or back room, right?

"Journalist Nicholas Kristof reported that Planned Parenthood and other family planning facilities 'prevent about one million unintended pregnancies a year, of which 345,000 would have ended in abortion.' This according to the nonpartisan Guttmacher Institute."

Again, there's a radical conclusion being drawn. But let me only state here that the Guttmacher Institute is as non-partisan as Planned Parenthood. GI started in 1968 as a division of Planned Parenthood. Partisan they are indeed. GI exists to advance birth control and abortion.

"If women who visit Planned Parenthood are forbidden from donating fetal tissue to biomedical labs, that tissue will be tossed in the waste bin. Republicans appear to prefer this option for some reason. Meanwhile, eliminating the legal tissue donation program would put a damper on research into preventing Alzheimer's and Parkinson's disease."

There are no other ways to acquire tissue for research than through an abortion? We can end a viable, growing human life as long as it saves other lives? That's the only way Alzheimer's and Parkinson's cures work?

And I'm not calling a fetus in the womb a human life just to support my argument. I'm taking that from another Salon writer who fully acknowledged that a child in a womb is indeed a living human person, yet would choose to kill that human person anyway. Are you arguing for the same thing, Mr. Cesca? Killing human lives to save lives and making the tax-payer pay for it, their scruples be damned? Is that really the pro-choice ethic?

Thank you for reading, and I hope you will carefully consider my comments. If indeed this is something that has convicted you -- if it has cut you to your core to realize a fetus is not some discardable tissue but is in fact a human life, needing to be protected and cherished -- then I hope you will repent of this murderous sin. There is forgiveness in Christ Jesus.

As you have recognized, there is such a thing as objective truth -- a truth that exists outside of ourselves. That truth is established in Christ alone; the way, the truth, and the life. No one gets to the Father God except through him. All of us have broken his law and deserve death, but it is through Christ that we receive eternal life. If you would like to know more, I'd love to share it with you. I look forward to hearing back from you. 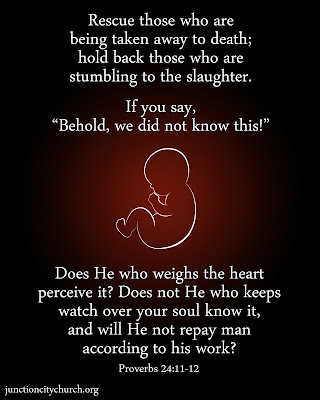