When Elijah Mocked the Priests of Baal 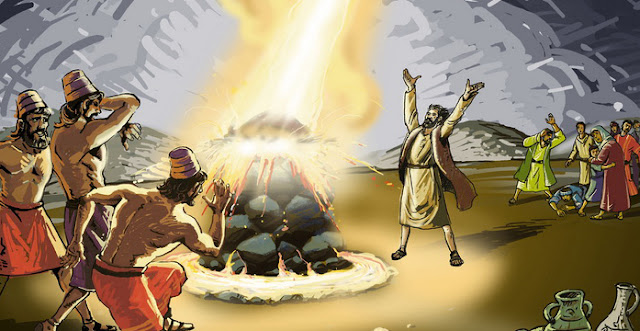 In 1 Kings 18:21, the prophet Elijah as directed by God stood before Israel and told them to pick a side: "How long will you go limping between two different opinions? If the Lord is God, follow him. But if Baal, then follow him." Yet the people did not answer him.

So Elijah issued a challenge. A fight to the finish. Elijah vs. the priests of Baal. One true prophet against 450 false prophets. Each would take a bull and place it on their own altar. The priests of Baal would pray to their god, and Elijah would pray to his God. The God who answered by fire, igniting the sacrifice on the altar, was the true God. And all the people said, "Let's do it!"

Elijah let the priests of Baal take the field first. They built an altar and chose their bull. Then after preparing the animal and laying it on the wood, they danced around it calling on Baal from morning until noon. "O Baal, answer us!" they cried. But there was no voice, and no one answered as they limped helplessly around their altar.

The word for "limped" in verse 26 is the same word for "limping" in verse 21. The priests of Baal had this awkward dance that they did, an ascetic contorting of the body that was rather uncomfortable and painfully exhausting. Eventually the priests started cutting on themselves, a self-mutilating display of false humility before a false god.

As they did this, the Scripture says that Elijah mocked them. "Cry aloud for he is a god," he shouted. "Either he is musing, or he is relieving himself, or he is on a journey, or perhaps he is asleep and must be awakened!" The priests raved on all the more, their blood all over them. But as verse 29 records, "No one answered. No one paid attention." Because there was no god there.

Elijah's turn. He called on the people to come near to him, and they did. He took twelve stones that represented the twelve tribes in Israel, and with them he built an altar. He dug a trench around the altar deep enough that if a person stood in it, the top would have been above the knees. On the altar Elijah laid the wood, then cut the bull in pieces and laid it on the wood.

Then he instructed, "Fill four jars with water and pour it on the burnt offering and on the wood." These were huge storage jars which would have held enough water to soak the altar and run into the trench. Yet Elijah said, "Do it a second time." And they did. Then, "Do it a third time," and they did until the trench was full. Then Elijah prayed;


"O Lord, God of Abraham, Isaac, and Israel, let it be known this day that you are God in Israel, and that I am your servant, and that I have done all these things at your word. Answer me, O Lord, answer me, that this people may know that you, O Lord, are God and that you have turned their hearts back." (1 Kings 18:36-37)

The fire of the Lord fell from heaven and consumed the offering. The wood. The stones. The dust. Even the water. All of it. Gone. And when the people saw it, they fell on their faces and said, "The Lord, he is God! The Lord, he is God!" Then Elijah instructed that all 450 prophets of Baal who deceived and manipulated the people be seized, and they were taken to Kishon where they were slaughtered.

Why do I mention this story? Because it's a great story, of course. And through it we might be reminded of God's loving patience, his faithfulness, and his mighty power. It is God who saves us, and to him belongs all glory.

But I confess, there's another reason I wanted to bring this up. Sometimes I hear this story used to justify how it's okay to make fun of the lost; those who are on their way to hell unless they repent and follow Christ. Hey, Elijah did it in 1 Kings 18:27, so therefore I can do it, too! I've observed this reasoning given by apologetics and discernment ministries responding to criticism because they mock unbelievers and false teachers.

But those who use 1 Kings 18:27 in such a way are taking it out of context. When Elijah mocked the priests of Baal, he wasn't just throwing random jabs and blind haymakers. Each one of his insults had a specific meaning. Yes, even his point about Baal going off somewhere to take a leak (relieving himself).

The word that appears in 1 Kings 18:27 for "mocked" is a variation of the Hebrew word hathal, which doesn't just mean mocked. It also means "deceived." Elijah was doing more than just mocking. He was egging-on the priests of Baal, pushing them to become more emphatic so that the Israelites would see no matter how loud they got, Baal did not exist to answer them.

Each insult, if you will, was specific to the attributes of the god that the priests of Baal were calling out to...
Contrast these insults about Baal with the attributes of the true God that Elijah called upon...
This was Elijah saying, "Your god does this, but my God does this!" All of his comments were intentional and purposeful, meant to direct the nation of Israel to what the true God was about to do before their very eyes.

The Israelites saw the 450 priests of Baal doing their little song-and-dance giving it everything they had and getting no response. Then over here was one confident prophet of God. He took a stand when no one else would, mocking Baal and all of his false attributes because he knew that false god did not exist and therefore could not retaliate.

Elijah precisely and obediently prepared his sacrifice. His methods were wise, raising up stones that represented the people of Israel, as if to tell them, "What you are about to see is grace for you, because the Lord your God loves you. He is faithful to you though you have been faithless toward him. He is calling upon you to repent."

As God with fire consumed that sacrifice and everything around it, the Israelites became astounded and worshiped God. God turned their hearts back to him (1 Kings 18:37). Just as God burned up the stones that represented the tribes of Israel, so he could have done to them for following false gods. But he was patient and loving toward them.

Folks, it is not okay to act like jerks toward those who are supposed to be our mission field. There may be times when rhetorical devices like parody or sarcasm can be employed in order to get a point across. I've done that before. But we must be wise in how we use them. There are other times when such devices can be misused and are not acceptable. I've done that before, too.

When you take a Bible verse out of context in order to build an entire hermeneutic around the idea that it's okay to insult others or point fingers and laugh, your motives are self-serving. That is not loving and it is not Christ-like. You're using the Scriptures to justify your behavior rather than being filled with the entire counsel of God and letting his word guide your behavior.

We are instead to follow the example of the Apostle Paul, who wrote "even with tears" about those who "walk as enemies of the cross of Christ. Their end is destruction, their god is their belly, and they glory in their shame, with minds set on earthly things."

Paul did not grab these individuals to be used as material for his vlog or podcast (or whatever the first century equivalent was) and deride them with put-downs much to the applause of his audience. He wept over them, even the ones who made his ministry hard on him (Philippians 1:15-18), just as Christ wept for those who would not listen to him (Luke 19:41-44).

Paul went on to say, "But our citizenship is in heaven, and from it we await a Savior, the Lord Jesus Christ, who will transform our lowly body to be like his glorious body, by the power that enables him even to subject all things to himself" (Philippians 3:17-21).

If we are confident citizens of the kingdom of God, as Elijah was a confident prophet of God, we must preach the word of God in love and care knowing that he will do his work to bring about repentance and saving faith.

I think also of Charles Spurgeon who said, "If sinners be damned, at least let them leap to Hell over our dead bodies. And if they perish, let them perish with our arms wrapped about their knees, imploring them to stay. If Hell must be filled, let it be filled in the teeth of our exertions, and let not one go unwarned and unprayed for."